The Duke football team registered its largest road win in ACC play since 1989 after it took down Virginia Tech, 45-10, on Friday night.

World-famous rapper, producer and television personality Snoop Dogg will be the headlining performer at the University of Kansas’ annual Late Night in the Phog.

I’ve been away from this blog for a couple of years, but hopefully I’m going to have time this season to get back to posting some fantasy basketball stuff. Sometimes life just gets in the way and fills up all your time and causes you to set your hobbies aside. I love fantasy basketball and […] 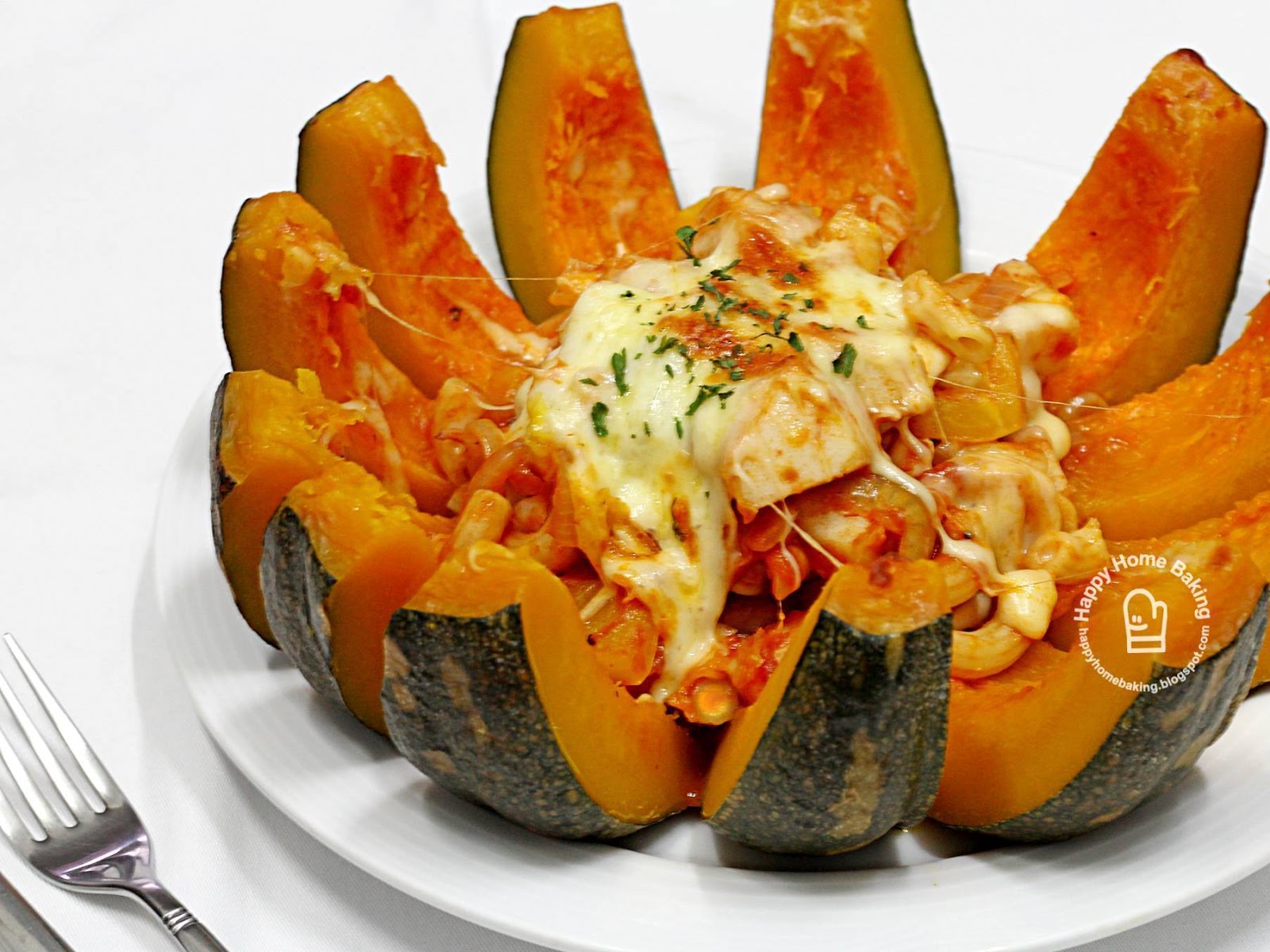 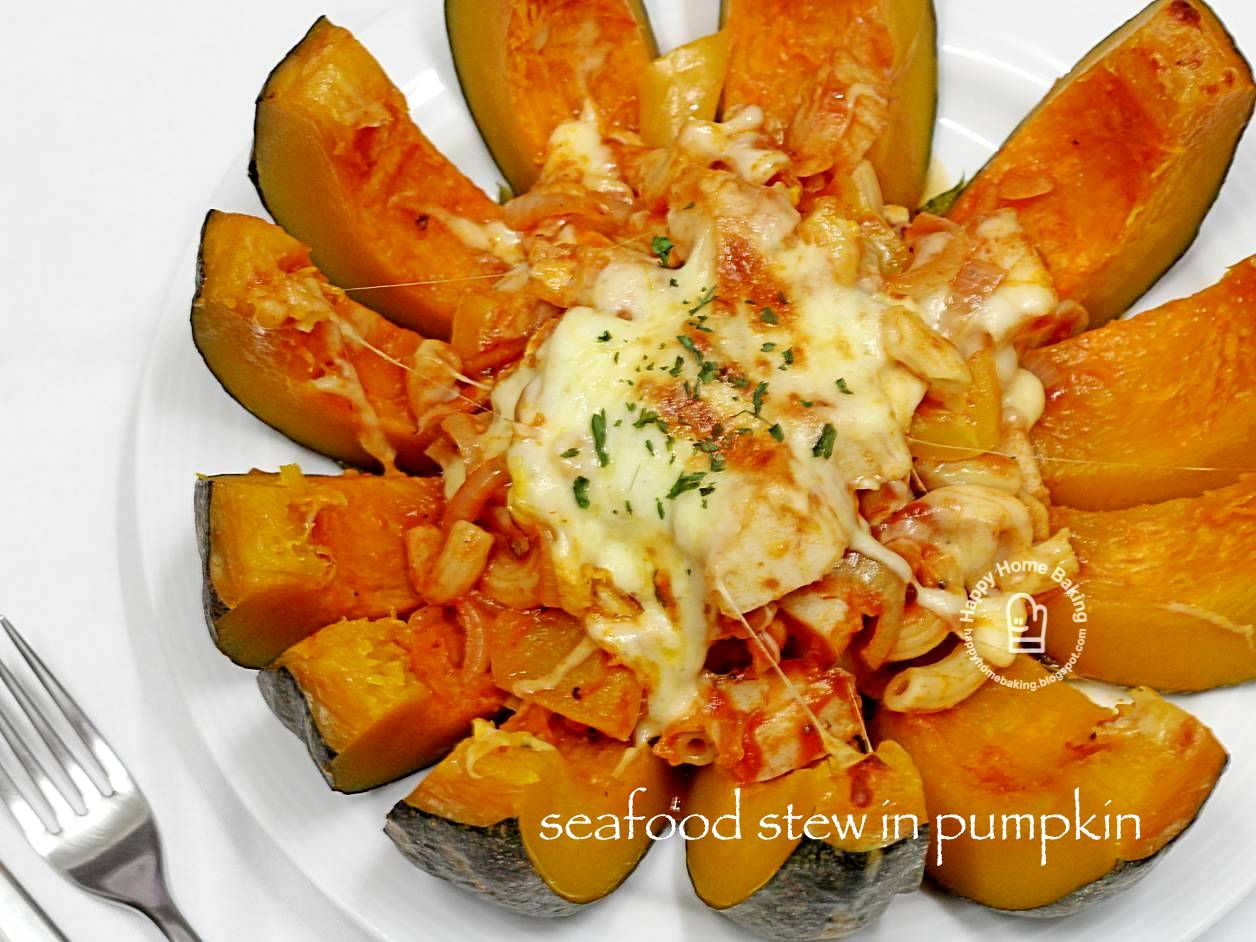 The dish is quite straight forward to prepare and I am confident that both my children would like it…even though one loves pumpkin and the other wouldn’t even want to take a tiny bite. Initially I had planned to cook this dish just for one of them, but, like the Chinese saying, 计划赶不上变化 (literally translated as plans always fall behind changes), I ended up serving this for the whole family. Well, I thought, the elder one could enjoy the entire dish while the younger one could just eat everything, except the pumpkin 😉 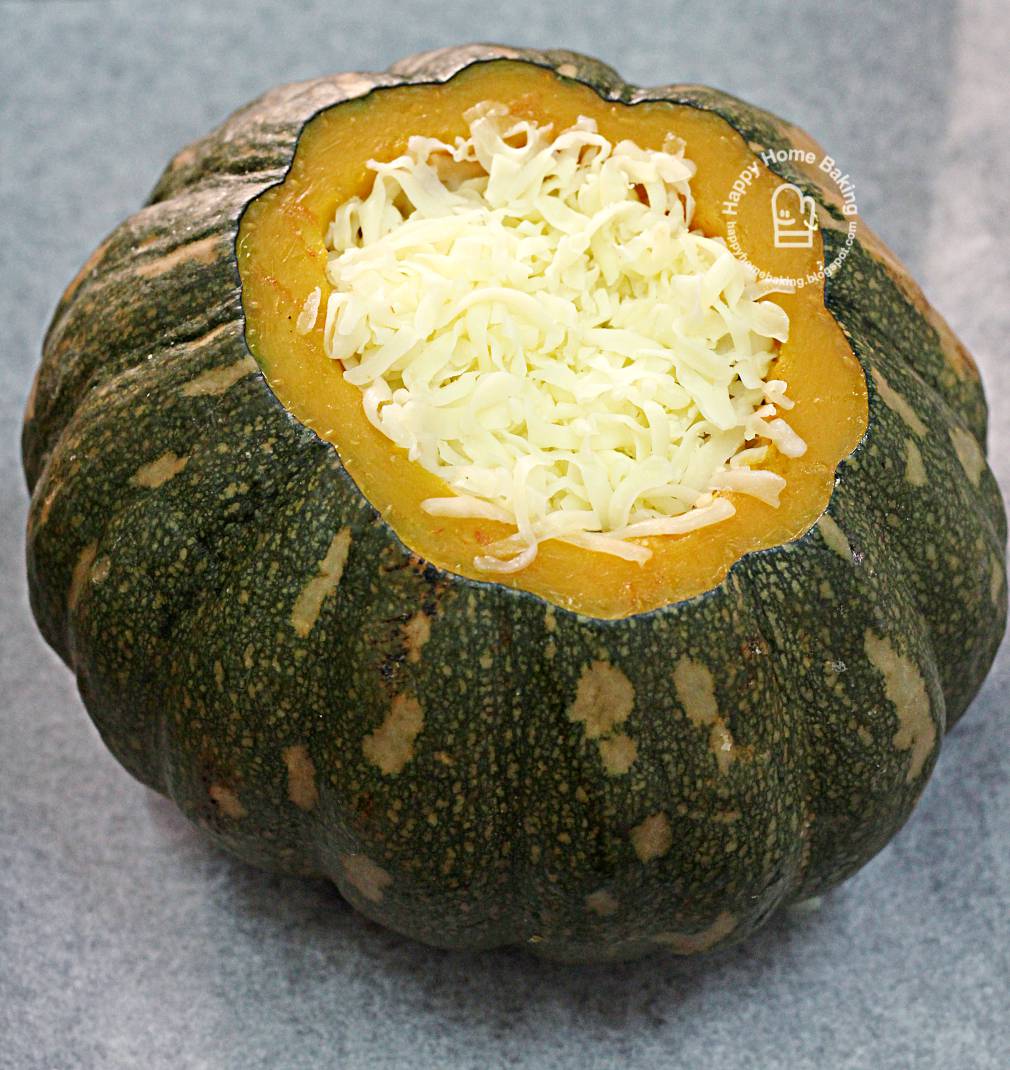 There are two ways to prepare the pumpkin to use as a ‘serving bowl’. The lid can be first carved out and the pulp removed before it is steamed. The other method is to steam the pumpkin first to make it easier to cut out the lid. Either way is fine as long as the pumpkin is cooked and has softened (fork tender) but can still retain its shape. Do not overcook till it becomes too soft otherwise it may not be able to hold the fillings. 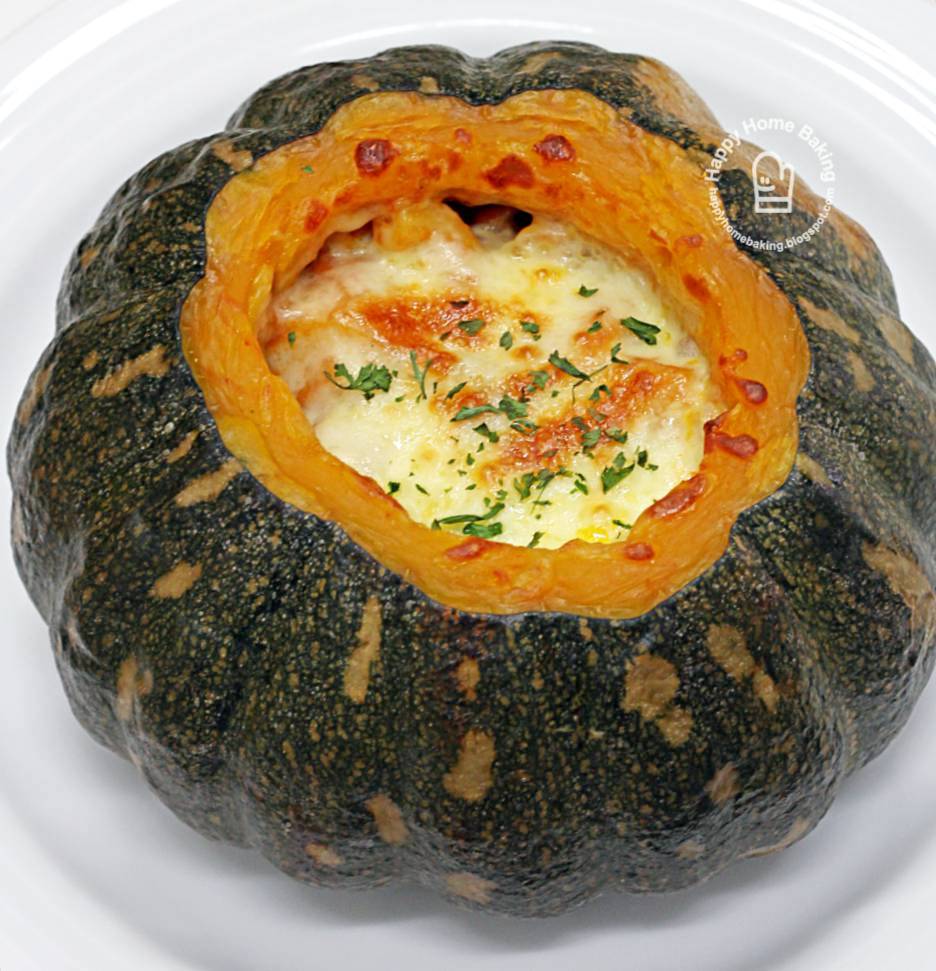 The cooked pumpkin is then filled with the seafood stew and topped with grated cheese before sending it into the oven to bake. The baking is only meant for the cheese to melt as the fillings is already cooked. 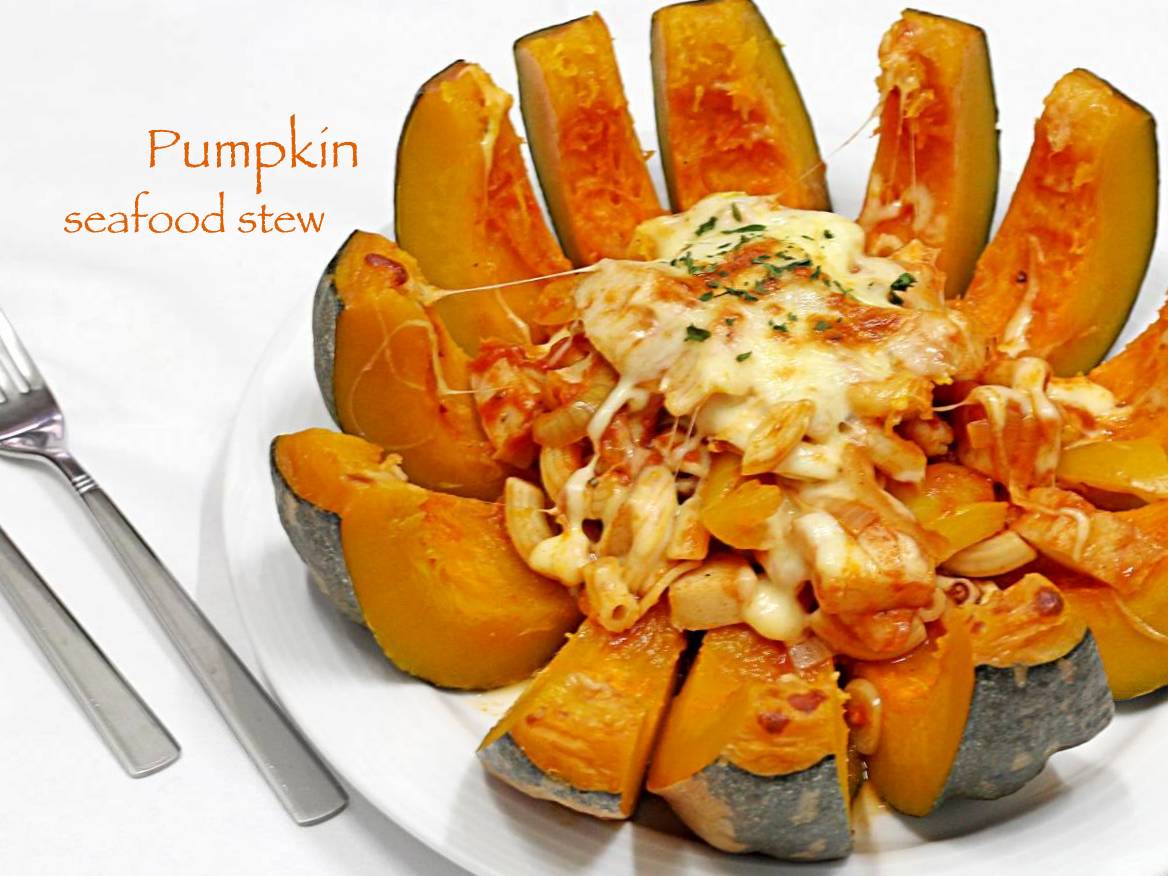 This Korean dish is normally prepared with a spicy seafood stew that is seasoned with gochujang (Korean chili paste) and gochugaru (Korean chili powder). However, the cooking show(“What shall we eat today?”) demonstrates a non-spicy version, replacing the chili paste and chili powder with ready made pasta sauce. To make it even more palatable to suit children’s taste buds, the pumpkin is brushed with honey before filling it with the stew. Besides the seafood, another key ingredients of the dish is Korean rice cakes. I replaced the rice cakes with cooked macaroni as I thought the it should go well with the pasta sauce, and it would be like pasta seafood marinara in a pumpkin. The dish was very appetising and I really like the nice presentation…something I would serve if I have guests coming over for dinner. I will also try the spicy version soon before my pack of gochugaru expires!

I bet you didn’t expect to see Elmo! Today is my daughter’s 2nd birthday and I made her a very special cake for the celebration. I’m sharing a video tutorial and complete guide to recreating this approachable Elmo cake design at home. Enjoy! 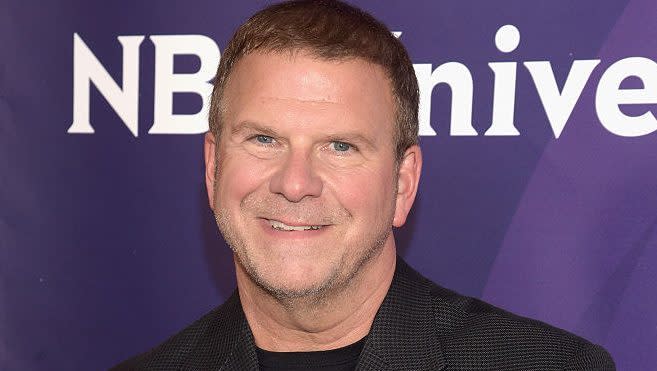 Fertitta went on to say that he felt that Anthony is one of the top 150 players in the NBA. That might be a stretch, but at least the Rockets owner is being cordial.

So, we’re getting married on Saturday.

For the first week after we got engaged, I embraced wedding planning with enthusiasm. Almost immediately, I went out and bought a huge stack of magazines which I diligently spent the weekend reading and making copious notes from. My lunch breaks were devoted to pinning images to my (secret) boards on pinterest and browsing wedding forums.  I lost several days to developing a ridiculously complicated spreadsheet with far more conditional formatting than was probably healthy.

To say that my feelings about getting married are mixed makes it sound like I have many feelings about the whole thing when, if I’m being honest, I don’t. I’ve never actively wanted to get married (which, to clarify, is not the same as saying that I didn’t/don’t want to get married) and I struggle to see why a 40 minute church service and a couple of signatures in a book should make any real difference to our life together or how we feel about each other. Plus, there are elements of the day  that we are both absolutely dreading but which are, sadly, non-negotiable if we actually want to end up married.

That is not to say, of course, that I am not (mostly) looking forward to Saturday. There is very little in life that I enjoy more than a good party (and goodness knows we’ve bought enough booze to make it a good party). I can’t wait for all of my favourite people to be in the same place at the same time. I am also very much looking forward to not feeling a sense of dread every time I open my email inbox (or, as my future husband put it less charitably, to a time when we don’t have to speak to our parents quite so often) and we both long ago lost any enthusiasm for discussions about ribbon colours or cutlery choices.

Plenty of ‘helpful’ people at work have told me that our wedding day will be the best day of our lives. Call me unromantic but I hope that isn’t true. The bit that I’m really looking forward to is what comes after the wedding. Which you can take to mean our married life together or the three honeymoons that we’ve got planned over the next six months…

I’ve made a lot of chocolate chip cookies over the year and this recipe is what I’ve ended up coming back to time and time again. It incorporates elements from all over the place but, most notably, the use of cold butter which I stole from Heston Bluemnthal. It seems a little counter-intuitive but it’s all to do with the temperature and solidity of the butter at the point which it bonds with the sugar which (sort of) makes sense to me and does end up giving me the texture I want in a cookie. That’s not to say, of course, that I’d ever turn down a cookie made with melted/room temperature butter. The difference is pretty marginal. 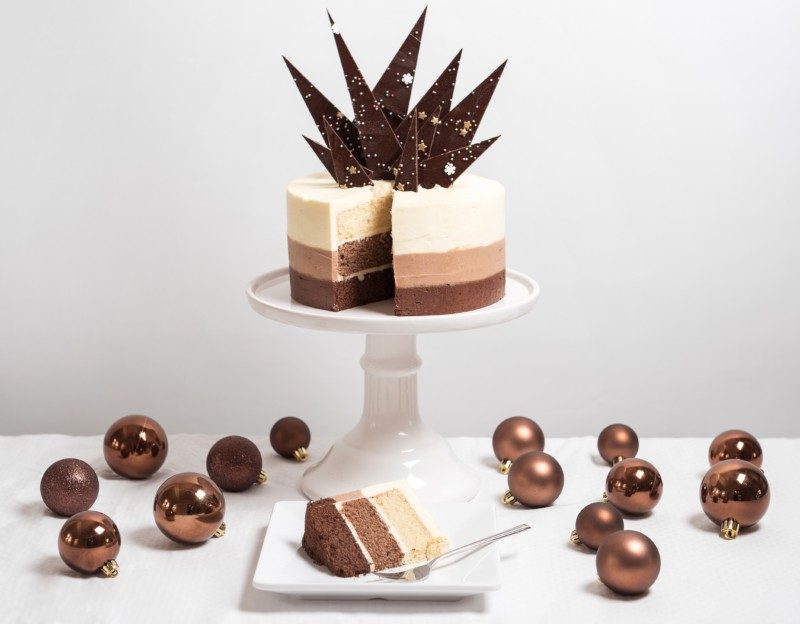 How about my modern Christmas crowd pleaser for your Christmas celebrations?

It’s easily adaptable  and you can add your own Christmas twist!

Keep your eyes peeled for versions that some other fab bakers have made in the lead up to Christmas.  All the recipe and how to information right here on Bake with Stork for you.

Last night I was in a pinch – Tony had purchased fresh corn tortillas for tacos, and I had Upton’s Naturals Chorizo Seitan, avocado, and other taco stuff… but no cheese. No problem – I can just whip up a batch of Nacho Chee-Zee Sauce from my book, right? Well guess what, Natalie? You’re out of cashews and you already have all the other ingredients in the blender, what are you going to do? I’m gonna add sesame seeds, that’s what.

Yep, it’s a simple swap, made with an inexpensive (and allergy-friendly) ingredient I already have on hand thanks to seed cycling. If you just want a cheddar-y sauce, omit the pepper and add a squirt of yellow mustard or a dash of apple cider vinegar. For a spicier sauce, add some of your favorite hot sauce.

Bake and Destroy – Recipes with mosh parts since 2006.