These paleo peanut butter cookies use sunflower seed butter and have a crisp edge and chewy center! With a vegan option.

They’re as close as you’re going to get without using actual peanut butter. And they’re terrific, so if you’re paleo, you don’t have to miss out on a great cookie!

You’re probably not going to fool your kids into thinking these are made with peanut butter, though. Thought I should give you that warning. 🙂 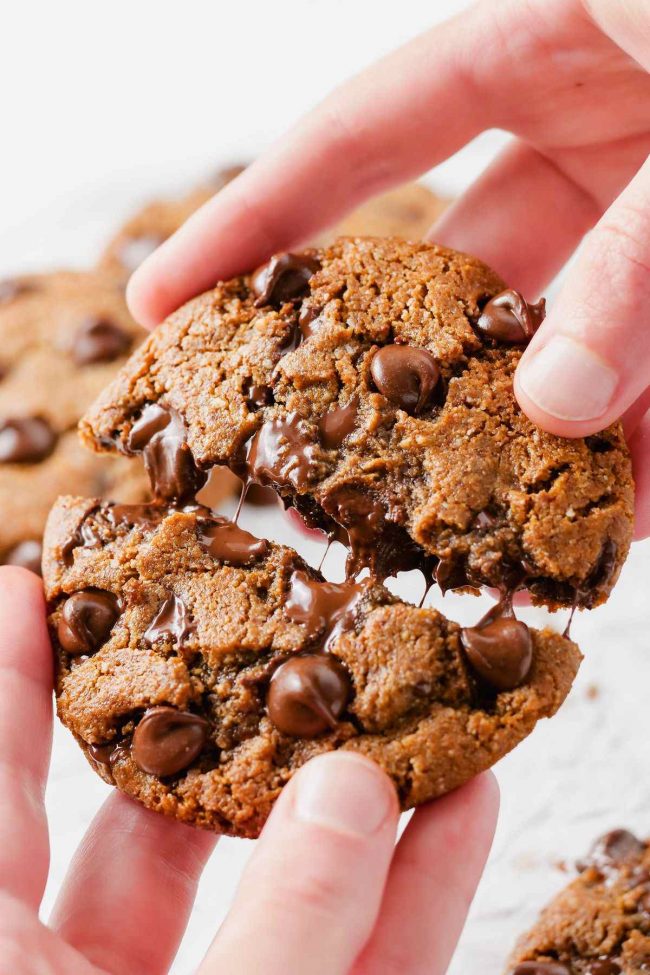 If you’ve tried sunflower butter before and thought that it was bitter – I get it. Unsweetened sunflower seed butter isn’t the most delicious option when it comes to nut butters.

Even if you think you don’t like sunflower seed butter, I bet you’ll love these paleo “peanut butter” cookies! Believe me – there’s enough sweetener in there to take care of any bitterness issues!

Something else I did to transform my Paleo Chocolate Chip Cookies into these paleo peanut butter cookies was to add another tablespoon of coconut flour. Sunflower seed butter is a little runnier than almond butter, and you could see it by looking at the dough.

Or is that just my homemade sunflower seed butter? I’ve made different variations of these cookies over 100 times and every time, the sunflower version comes out very wet – at least until you chill the dough very well! 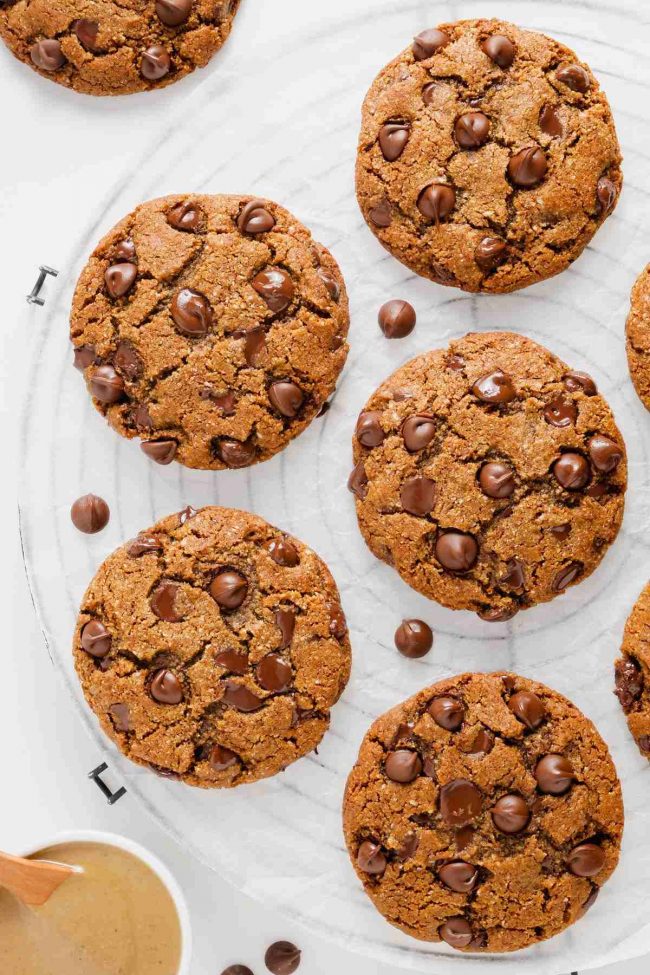 What’s up with the lemon juice?

If you’ve ever made something with sunflower seed butter, you might’ve had it turn green. It’s a normal reaction between the chlorophyll in the sunflower seeds and the baking soda. It doesn’t change the taste, and it doesn’t mean that anything has gone bad.

I’ve read that a splash of lemon juice helps. So that’s what I’ve done! So far, no green cookies. 🙂 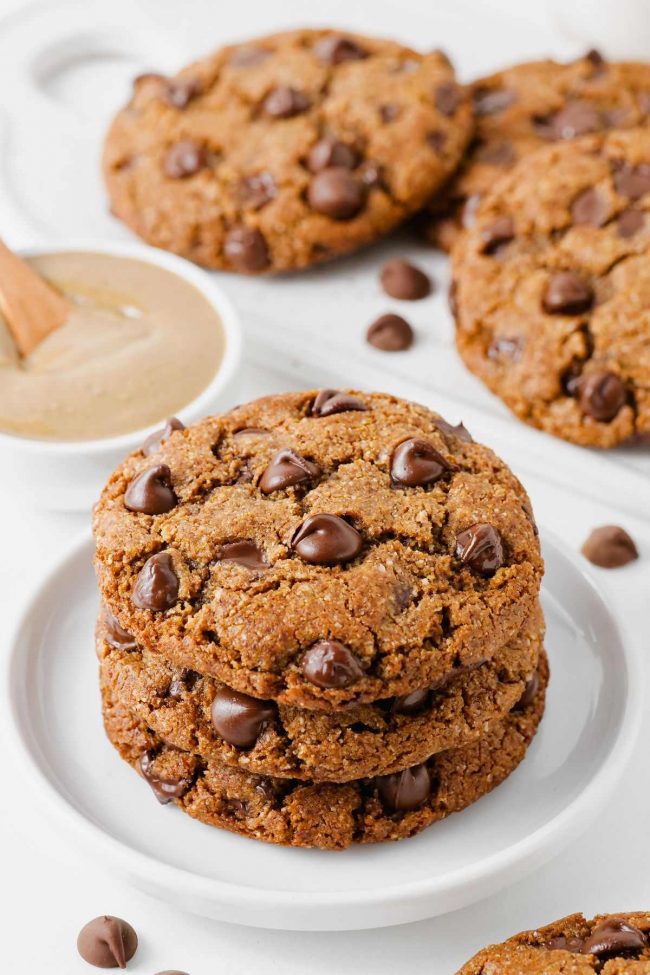 You just have to use a chia egg. Other people have used flax eggs with success.

If you try something else out, please let me know so I can add it to the recipe notes! 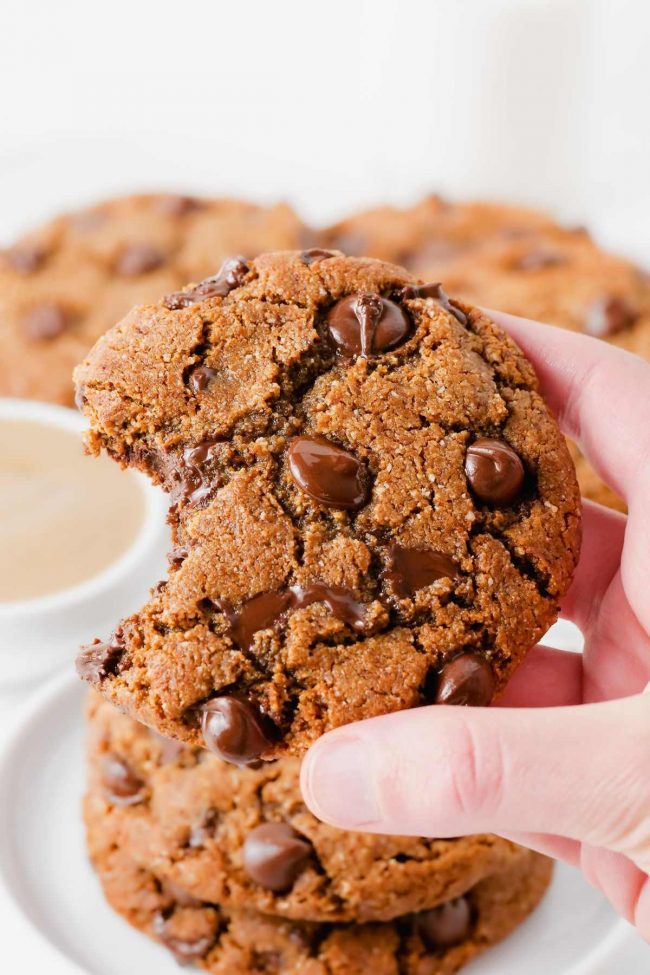 I’ve gotten so many questions about using maple syrup or honey in place of the coconut sugar in my cookie recipes. I’ve tried it loads of times and just don’t like the result.

You, unfortunately, can’t sub a liquid sweetener for a granulated one and not reduce the liquid. The problem with my recipe is that there’s no liquid to reduce!

I experimented with just using the yolk, adding more flour, and stuff like that but nothing worked.

So the same goes for this paleo peanut butter cookies recipe – you have to use a granulated sweetener unless you want to totally change the texture of the cookies. When you sub in a liquid sweetener, these cookies will taste like a healthy cookie. 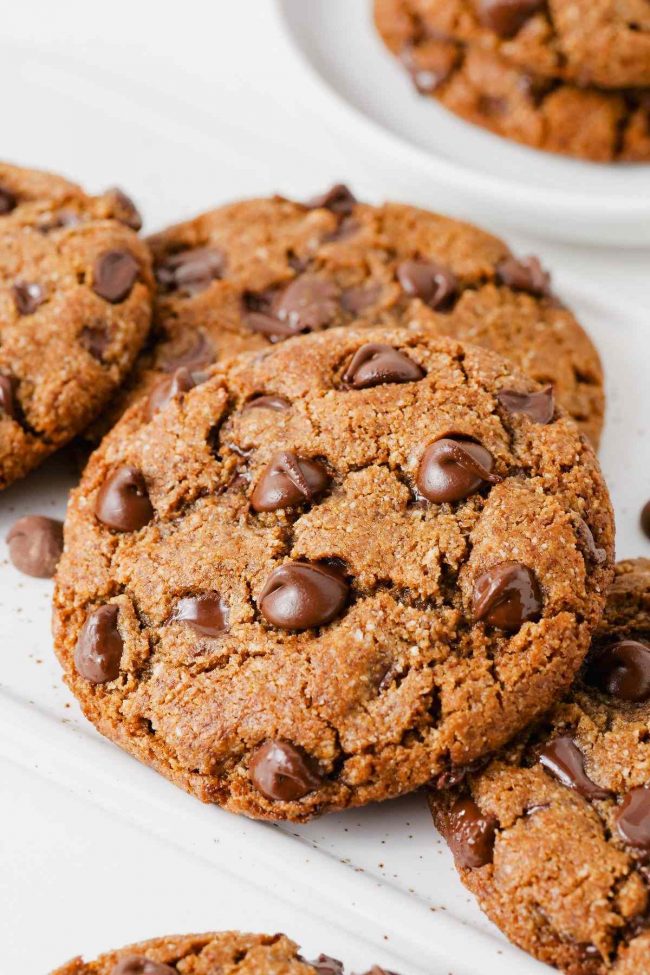 Want to use peanut butter?

And as for using actual peanut butter in these cookies, I still haven’t had success with that. I’ve had loads of people tell me in the original recipe that they used it with success, but I really wonder if they first tried the almond butter version.

Every single time I’ve tried, the resulting cookie texture is definitely different. The peanut butter ones are cakey, don’t have an awesome texture, and they don’t taste very peanut buttery. I actually prefer these sunflower seed butter cookies over the real peanut butter version!

But! If you want to just use coconut flour, and no almond flour, I’ve got the perfect recipe for you. These Vegan Peanut Butter Cookies use the same base recipe as today’s recipe, but with peanut butter.

There are a few small changes, so definitely check out that recipe if you want to use peanut butter.

And if you don’t want them to be vegan, I tell you how to unveganize them in the recipe. 😉

I can’t wait to see your photos of these Paleo Peanut Butter Cookies! Remember to tag #texanerin so I can join in on the fun. Enjoy!

As an Amazon Associate, I earn from qualifying purchases. For more info, see my disclosure.