It’s the eve of the NCAA tournament 2013 edition, and I realize I haven’t posted in a long while. Seeing that is Spring Break for me, I thought I should post who I am rooting for this March Madness. My heart is still with Bill Self and the Jayhawks, but this year I find myself rooting for Jim Larranaga and the Miami Hurricanes. Coach Larranaga is a basketball coach through and through, he’s a big practice guy and still comes from the “defense wins championships” mentality that I see lacking in a lot of basketball play over the past decade or so. 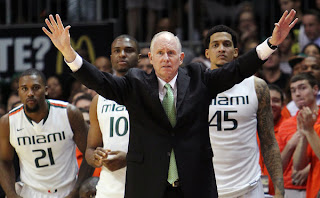 I’m a big fan of Larranaga’s scramble concepts and the teams that I’ve helped coached used all or part of them quite a bit. But it looks like this year, they are not so much forcing turnovers, but limiting opponent possessions (through great defensive rebounding) and keeping opponent FG% low. I haven’t had a chance to watch a lot of Miami games, but I would bet that his camouflage defense is more prominent this season with the longer athletic types he has this season.

But the best part of Larranaga’s coaching method is his attention to detail. To plan all the practice details and to prepare the way he does is really the secret to his success. He writes everything down, and keeps detailed notes of goals and what needs to be done.

Anyways, I hope everyone enjoys the tournament. I look forward to see which teams get to last to the Final Four.