To put this data set together I again used Basketball-Reference.com’s Player Season Finder, but this time I collected the advanced statistics to go along with the player’s 3pt makes and attempts. Also, I used more years of data, as this data set is from the 1989-90 to 2008-09 seasons.

My original threshold for including the player season in the data set was to require at least two 3pt shot attempts during the season. I have, however, increased this threshold to eighty two 3pt shot attempts in an effort to isolate the data set to only players that we expect to shoot 3pt shots. This means that I’m attempting to quantify those players that are “regular” or “semi-regular” 3pt shooters and disregard those that do not consider the 3pt shot a part of their game.

To estimate the relationship between age, usage, and 3FG%, I’ve fit the following model:

I fit this logistic regression as a multilevel model to allow the intercept and coefficients for USG% and the age quadratic to all vary by player. This type of model allows us to estimate the player ability while allowing us to estimate individual USG% lines and individual player aging curves.

The average player results are as follows:

Trevor Ariza was the source of the original motivation for looking at the relationship between usage and 3FG%, so I thought it would be appropriate to present a graph of his estimated aging curve at usage levels of 10% (blue), 20% (black), and 30% (red). The dots represent the sample 3FG% for Trevor at the specified age: 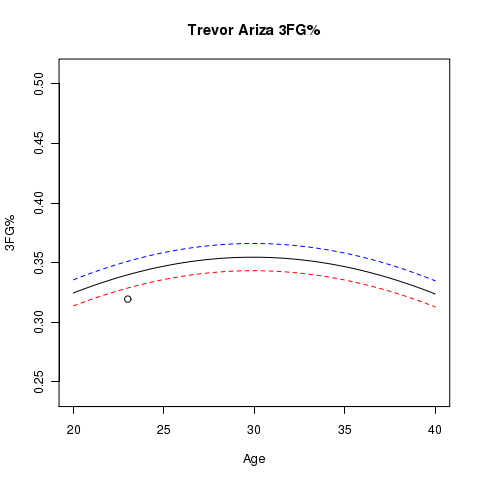 One thing you’ll notice is that we only have one data point on this graph. This is because Trevor did not shoot many 3pt shots until last season with the Lakers.

One thing to note is that this model suggests that last year’s 31.9% performance isn’t a fair representation of his true ability. This model estimates his fair ability of making a 3pt FG attempt to be 34.3% last year with the Lakers at age 23 using 16.7% of his lineup’s possessions.

Here are some other player graphs that have more than a single season’s data, where lines for the estimated aging curve at usage levels of 10% (blue), 20% (black), and 30% (red) are shown. The dots represent the sample 3FG% for the players at the specified age: 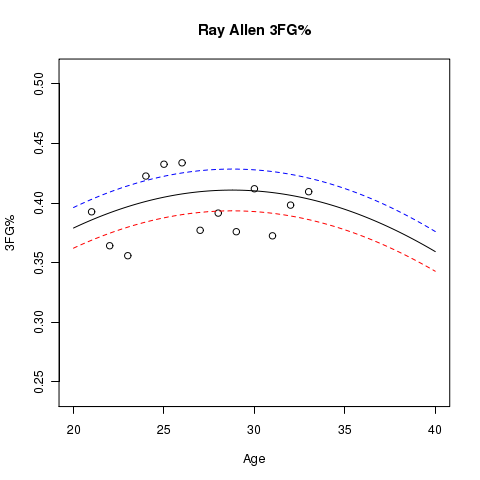 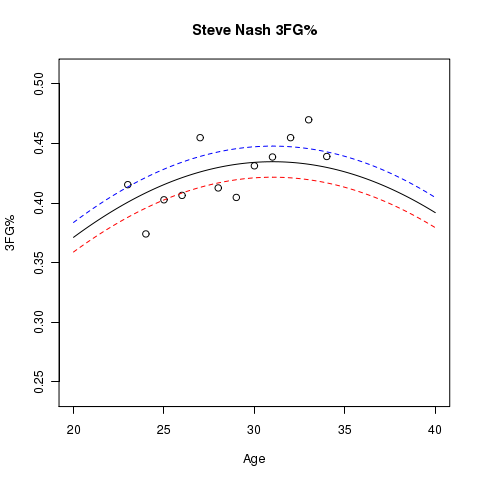 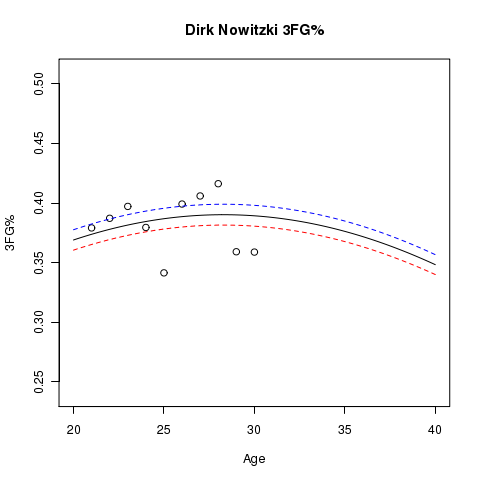 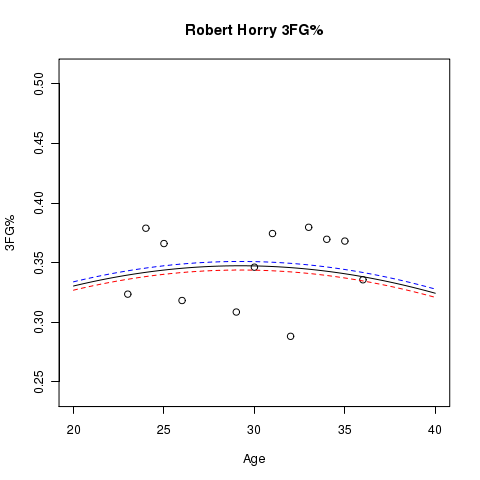 The next step is to try and validate these models using out of sample data. One thing I would like to do is to use cross-validation to measure the expected prediction error of this model. Also, I would like to quantify the uncertainty around these estimates. Current efforts to do this have left me unsatisfied, but there are certainly some confidence bounds we could generate for these estimtes, and they should prove to be worthwhile to create.

I’ll have to wait to do this, as my final exams start tomorrow, and I’ve blown off studying for them about as long as I possibly can. 8)